Global icon Dwayne Johnson leads the cast of Legendary’s Skyscraper as former FBI Hostage Rescue Team leader and U.S. war veteran Will Sawyer, who now assesses security for skyscrapers. On assignment in China he finds the tallest, safest building in the world suddenly ablaze, and he’s been framed for it. A wanted man on the run, Will must find those responsible, clear his name and somehow rescue his family who is trapped inside the building…above the fire line. 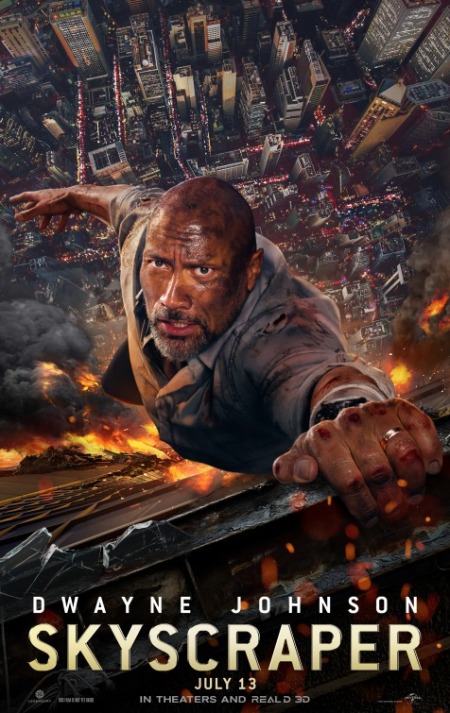 I grew up on 80’s and 90’s action movies. Movies with over the top sized guys doing over the top stunts that nowadays Neil deGrasse Tyson would ruin with science. Needless to say when I heard about a movie where Dwayne Johnson fights in a building with only one leg, I was looking forward to that experience.

That brings me to Skyscraper, Johnson’s latest film that finds him as a former FBI agent turned skyscraper security expert (raise your hand if you knew that was a job, yeah me neither). The world’s biggest skyscraper is slowly opening but hired thugs want to destroy it and steal something inside setting up Johnson as the fall guy. Think of it as Die Hard and The Towering Inferno for the 21st century.

Going into the movie I wanted it to be dumb. That’s not an insult, I just wanted a check your brain at the door, eat some popcorn, old-school summer blockbuster. I wanted The Rock punching buildings and crazy one-liners. I got some of it, but not all. Overall I enjoyed Rampage, Johnson’s similar film earlier in the year, but it took itself a bit too seriously. This doesn’t take itself as serious, but I wanted a bit more nonsense from it. I’ll explain that in a bit.

The film has a bunch of positives. Johnson is hands down one of the most charismatic men in the known universe. He handles these types of movies with ease. He’s still jacked and looks the role. He can do this movie in his sleep, but I show up every damn time because of him. It’s nice seeing Neve Campbell doing some work and whoever cast the 2 kids in the film did a perfect job. I can see both of them as the offspring of Campbell and Johnson.

The movie is over the top as long as you don’t think too much about it. One scene sees Johnson climbing a crane to break into the skyscraper after the fire starts and his family is trapped. If you don’t think about how hot that metal crane would actually be being that close to a blaze, it’s pretty suspenseful and ridiculous. Don’t think about the math/science and just cheer along with the crowd. That pretty much goes for the entire movie. At heights that the building climbs to, so much of the movie couldn’t actually happen but don’t be a Neil deGrasse Tyson Debbie Downer.

The biggest negative with the movie is the lack of jokes. Johnson is a funny guy and has done plenty of action comedies. Add in the fact that his character has one leg and there should be some classic one-liners in it. The movies I grew up on with Arnold, Sly and Bruce Willis gave us iconic lines. There isn’t anything like that here. When you have a guy with a prosthetic leg, how on Earth do you not make a foot joke somewhere in the movie? Writer/director Rawson Marshall Thurber is known for comedies like We’re the Millers, Central Intelligence (with Johnson and Kevin Hart) and Dodgeball so where are the jokes? We got off on the wrong foot. This isn’t your floor. Give me something to quote!

Skyscraper is fun, but it’s not as funny as it should be. I’ll watch pretty much anything with Dwayne Johnson especially these ridiculous action movies. If you need to shut your brain off and sit in some air conditioning for a while this is perfect for you. It should do well in the U.S., but it will be huge in China. It’s based in China and co-stars some famous Asian actors and Johnson himself does well overseas.