After surviving a near fatal bovine attack, a disfigured cafeteria chef (Wade Wilson) struggles to fulfill his dream of becoming Miami’s hottest bartender, while also learning to cope with his lost sense of taste. Searching to regain his spice for life, as well as a flux capacitor, Wade must battle ninjas, the yakuza, and a pack of sexually aggressive canines, as he journeys around the world to discover the importance of family, friendship, and flavor – finding a new taste for adventure and earning the coveted coffee mug title of World’s Best Lover. 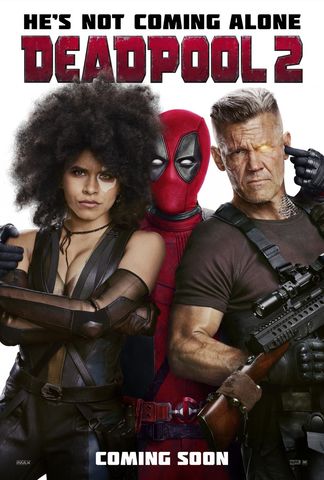 Deadpool 2 isn’t as good as the first film, but it’s still quite good. With the first film, you weren’t sure how it was going to be. Was it going to be violent like the comics? Would Wade Wilson/Deadpool break the fourth wall? Would it live up to all the hype? Well if you’ve seen the first movie you know the answer is yes to all of those questions. Since we knew those answers, the only question I had for this sequel was, is it going to be as good or better than the first?

I had a lot of fun with the movie. It’s violent and comical and Ryan Reynolds is gem perfect as Deadpool. I had a couple of issues with the film and I’ll explain without spoiling too much. There were a couple of scenes with Reynolds and Morena Baccarin that didn’t work for me. It’s hard to explain without ruining what happened prior, but tonally these scenes didn’t fit. I also didn’t quite love the ending. It takes a bit too long to get to where you know it’s going. For a fast paced film, the scenes with Reynolds & Baccarin and the ending seem out of place.

Other than that, the movie is exactly what we wanted/expected from the Merc with the Mouth. There are some fantastic kills, some laugh out loud moments and secretly a lot of heart. Dopinder, the taxi driver from the first film, gets a lot more to do in the sequel and he’s great. They added in some new characters, Domino, Zeitgeist, Peter and others and most work.

The biggest addition is Cable. Going into the movie I didn’t love the pick of Josh Brolin as Cable. He’s already Thanos in the MCU, but to me he didn’t quite fit the size of Cable either. Even though I still think Dolph Lundgren should have been the choice, Brolin plays along and takes quite a few punch lines from Deadpool.

If you liked the first movie you’ll enjoy Deadpool 2 as well. Even with the addition of new characters, it’s still 100% a Deadpool movie. The opening credits and end credit scenes are absolutely fantastic as is the music. There are a couple of great Deadpool comics Easter eggs/references too for those who know the books. I didn’t quite love it as much as the original, but I liked it more than Avengers: Infinity War.

One thought on “Review: Deadpool 2”