Hello everyone! I enjoy a good game of Hearthstone, it helps me relax after a hard day reviewing games. There’s two formats of play, Standard and Wild. Wild is where you can play almost any card while Standard is for the newer expansions only. In wild, Reddit user JamieFTW is speaking out against a deck that threatens the enjoyment of Hearthstone. The deck is Naga Sea Witch, here’s a chat we had: 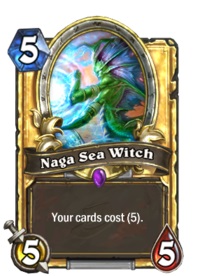 Me: What’s the overall issue with Naga Sea Witch?

JamieFTW: Naga Sea Witch is a card that was released in the League of Explorers adventure. It saw very fringe play in fun decks because it did exactly what the card text says “Your cards cost (5)”. This means that if you played it on turn 5 (or 4 with the coin) and your opponent didn’t kill it, you could play a 6, 7, 8, 9, or 10 Mana card for 5 Mana on your next turn. So it was kind of like Spiteful Summoner, but with no deck building requirement on big spells and you didn’t get a big minion for free on the same turn. Then, in August 2017 a patch was released which contained a change to the behaviour of Naga Sea Witch. For cards whose text reduced their cost, these cost reductions take effect AFTER the Naga Sea Witch cost reduction. So for example, if you have a 10 Mana giant in your hand that costs 1 Mana less for every card your opponent is holding, once Naga Sea Witch hits the board the giant’s cost is reduced from 10 to 5, and then from 5 to 0 if your opponent is holding 5 or more cards. The outcome of all of this is you can play Naga Sea Witch (a 5/5 minion) and 1 or more giants (8/8 minions) – and it’s not uncommon to see 3 or 4 giants – on turn 5. If you aren’t playing a class that can clear the board on turn 5 or you are playing a class that can clear the board but you don’t have it in your hand, you just pretty much lose the game right there. Not very fun.

Me: So what makes this deck issue bigger than the ones in the past?

JamieFTW: I personally don’t take issue with strong cards in the Wild format. In a format where every card is available, obviously the power level is going to be higher than just having two years worth of cards. For me personally, Naga Sea Witch is a problem because it’s a card that you can play on turn 5 in any class with no setup, and vomit out a bunch of 8/8 minions. I love Hearthstone. I advocate for all play styles, even the ones I dislike (I’m looking at you Aggro!). Naga Sea Witch isn’t a play style though. It’s a single card that turns the game into a coin flip on turn 5. This card is literally making a mockery of my favourite game. Random fun in Hearthstone is one thing, Naga Sea Witch is a different thing entirely.

Me: What do you believe is allowing the issues to go unaddressed or unchanged?

JamieFTW: Rather than speculating or putting words in Team 5’s mouth, it’s just easier to reference Mike Donais’ response to last month’s “It’s time to nerf Naga Sea Witch, Blizzard” thread that was created by Wonder_Buster. Mike said: “We are keeping a close eye on Naga Sea Witch and I wouldn’t be surprised if we include it in a future nerf patch, but I want to clarify a few things that are incorrect. Naga Sea Witch Giants is not the best deck in Wild. If you look at any data report based off of actual math instead of feelings that is pretty obvious. Another thing you can look at is the Wild Championships that happened last weekend.”

However feelings matter a lot to us, and we have changed cards in the past that were not part of the best decks many times. Another thing I don’t like about the Sea Witch deck is a negative impact on the meta by keeping a bunch of decks out. Keep in mind this will always be true, the good decks will be so strong in Wild that the lower tier decks will feel quite tame in comparison.”

So it looks like there are at least a couple of things that have resulted in the issue going unaddressed: 1. Blizzard’s statistics do not show it to be the “best deck”.  2. They appear to be seeing how strong the community’s feelings are towards the card.

The Caverns Below was a card that was previously in the same boat. It’s probably not a coincidence that this card, while restricted to a single class, also allowed the player to vomit out a bunch of strong minions around turn 5.

I hope that the collective threads that have come out of the ad have shown Team 5 that the community has very strong (negative) feelings about Naga Sea Witch, and it too should receive changes as The Caverns Below did.

Me: How has the fact that this is a Wild issue as opposed to a Standard issue affected the communities view on it?

JamieFTW: You know, the number of responses that have been “It’s Wild, I don’t care” have been significantly outnumbered by the “I don’t even play in Wild but this sucks, I will continue to upvote”. For the reputation that /r/hearthstone has for being “toxic”, it is pretty clear that on this issue the community – both Standard and Wild – appears to be a united front. Some players will always stick to Standard and that’s cool – we have two of those just in my house alone (not me obviously!). However, I think as time passes and more sets rotate there will be an increasing amount of players who are interested in Wild and at least giving it a try. And I think those potential players understand how ridiculous the whole Naga Sea Witch situation is because many Standard players take issue with Spiteful Summoner on turn 5 or 6 giving you a free 8/8 (or bigger!) minion. Naga Sea Witch gives you a board of 8/8s. That’s just not fun to play against.

Me: What kind of response have you gotten from Blizzard or the Hearthstone team?

JamieFTW: At this point I have not received a direct response from Blizzard or the Hearthstone team, and to be really fair to them I don’t expect to. Making this ad was a fun, interesting way of making sure that the Naga Sea Witch issue doesn’t disappear from visibility. That seems to have worked, which is amazing, and the community has been super supportive (thank you /r/hearthstone!).

Some people in the community have suggested that if Team 5 were to respond directly to me it could be perceived as acknowledging the ad itself, which may be viewed as setting a precedent that they don’t want to set. I personally don’t see it that way, but I could understand if that were true.

I do hope that Team 5 responds definitively to the issue sooner rather than later. By that I mean the approximate timeline and intended change(s). I have every confidence that behind the scenes they have been working on what to do for some time. I think the whole Wild community has been very patient about Naga Sea Witch and would be very happy to have some news.

Me: What’s your plan going forward?

JamieFTW: I am going to do what I said I would do, which is to run the ad until the Naga Sea Witch card is nerfed or the issue is otherwise resolved. This whole situation, though, has given me another idea. The root cause of all of this is that the player base does not really have a great way to communicate with Team 5 and vice versa. Maybe it’s time that changed, too. I have been accused in both public and private messages of attention seeking and trying to profit off of the Naga Sea Witch ad. I honestly don’t see how someone could think that, but whatever. If I follow through with this next idea I will be taking steps from the beginning to make it clear that I will not be at the centre of it – the community will. The revolutionary is not the revolution if you know what I mean. I can’t wait to see what happens next.

There you have it, JamieFTW vows to stand against this deck until the matter is resolved. Team 5, the Hearthstone development team, has not responded to my request for comment at the time of publishing this article. Make sure to checkout Reddit.com/r/Hearthstone to keep an eye out for JamieFTW’s seemingly daily posts!

Don’t forget to check out our new(ish) Youtube Channel where you can see interviews, reviews and random other gaming videos! Until next time Templars, stay classy. https://www.youtube.com/channel/UClc8BQQ7fhsAJYto3Y1o35w