Disney’s “ZOMBIES” is a music and dance-filled story set in the fictitious world of Seabrook, a cookie-cutter community brimming with perky conformity 50 years after a zombie apocalypse. Today, the zombies pose no threat, but are required to live in Zombietown, an isolated, rundown community infused with their unique creative spirit. When zombies are finally allowed to enroll in Seabrook High School, the charming, charismatic zombie Zed, who is determined to play football, meets freshman Addison who dreams of being a cheerleader — the ultimate form of status in Seabrook. Addison takes a lot of flak for befriending Zed and his zombie friends, but comes to learn that zombies and cheerleaders aren’t so different after all. Zed and Addison work together to show Seabrook what they can achieve when they embrace their differences and celebrate what makes them a community. 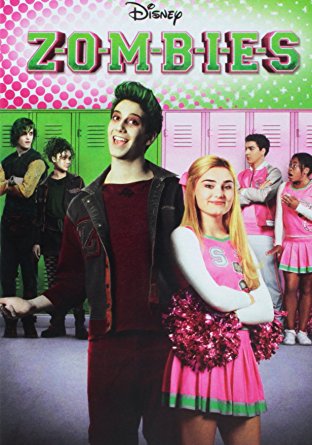 I’m not exactly the target audience for Disney’s Zombies. I’m a grown man without kids of any age so before watching it I pretty much wrote it off as bad. And sure there are singing and dance routines in it and it’s definitely for the tween and teen audience, but honestly, I have to give it some originality points! Shocking, I know.

It is the standard story of a popular type girl and outsider boy we’ve seen a thousand times. She wants to make the cheer squad. He wants to make the football team. But, he’s a zombie! The story is based in a small town that had a chemical leak turn people into zombies. Over time they learned to adapt and zombies got to live somewhat normal lives. The regular people still hated them and didn’t trust them, but zombies weren’t taking headshots anymore.

They finally get to go to school and interact with other people. The lead zombie Zed wants to be normal and play football. The principal says no, but once Zed shows some abilities, the football coach wants him. Zed helps turn around the losing team and soon zombies are looked at in a better way till jealousy hits.

Yes this is 100% a Disney film for tweens and teens, but, and I can’t believe I’m going to say this, it actually brings something new to the zombie genre. Like Warm Bodies a few years back, it shows you can still have original storylines in an overcrowded genre. I don’t see The Walking Dead crowd going crazy over this, but if you are an adult who likes that show and has a kid that is too young for it, Disney’s Zombies is a good entry-level film for them. I’m surprised to say this, but it is…

RECOMMENDED FOR WHAT IT IS!