I had the pleasure of getting to Catch up with Taliesin and Evitel this week! If that name sounds familiar it’s because they’ve become a very prominent World of Warcraft YouTube channel and we interviewed them last year! So sit back, relax and enjoy the chat!

Me: Since the last time we talked, your channel has grown quite a bit. What would you say are the major contributors to your guys success?

TALIESIN – You mean because people like him so much and we ride on the wave of his popularity?

E – No, I mean literally Khadgar. He’s got, like, thousands and thousands of different Google accounts and he’s subbed to our channel with all of them. He just…. really likes watching himself on screen.

T – And my mum. She watches every video three times. I think that helps boost our numbers too. It’s because I never call her so it’s the only way she gets to see me. So my advice to aspiring Youtubers is… don’t ever phone your mum. Or something.

Me: There’s a lot more production value to your videos now compared to the past. How has that affected video output and your overall process of creating content?

T – We always spent a lot of time on our videos and put plenty of work into them. The upside of that is that they are (in our opinion) more fun to watch, or at least a bit different to other WoW videos. The downside is that they do take a lot of time to make, so 2 a week is pretty much the maximum we can manage most of the time.

E – Ironically though, as we gather more equipment and resources it actually makes that process a bit quicker and easier. Like, there’s an old Hotfix intro from the early days where we wanted to put the Nightborne “Something’s not quite right” eye on top of people’s heads that we’d filmed walking along the river Thames. Taliesin took literally 10 hours to make that one shot because he had to hand animate every single frame for every individual head, then render it and do it all again for the next person’s head etc… now that wouldn’t take anywhere near as long…

T – Which is why we can be a bit more ambitious in the intros and stuff. It’s a win/win.

E – And I mean, the production values might be a bit higher than they were when we first started, but they are still pretty shoddy compared to most other Youtubers, like Bellular or someone like that. We should be ashamed really.

Me: Battle For Azeroth’s alpha is here. What has been your favorite thing that you’ve seen so far?

T – I absolutely love the Kul Tiras capital. It’s all shipyards and trenchcoats and scoundrels. It’s just beautifully realised and pretty much the zone I’ve always wanted them to add to WoW.

E – And there are doggos everywhere.

T – Well yeah there’s that too.

Me: Brown orcs are more or else confirmed and you guys even did a video on allied races as a whole. Aside from the races you mentioned, what do you think Blizz might hit us with out of the blue in terms of a new playable race and why?

T – The big one I’m waiting for is Night Elf Worgen. I think it’s time. It would also be great to give Blizzard the chance to re-do the worgen models and druid forms, too. Everyone knows the worgen feral form should just be them with their claws out slashing people like Genn Greymane, make it happen Blizz!

E – Looking at how the Draenor orcs aren’t just brown but have options to be pretty much ANY of the uncorrupted orc tribes, I’d like to see something like that added to Dark Iron Dwarves. So, you don’t just get Dark Iron options in the character create screen but Wildhammer too, let’s complete the council! And then of course you’d need cool druid options for the Wildhammers too.

T – I think we just get really excited about new druid forms.

E – Definitely. I don’t even play druid but definitely. 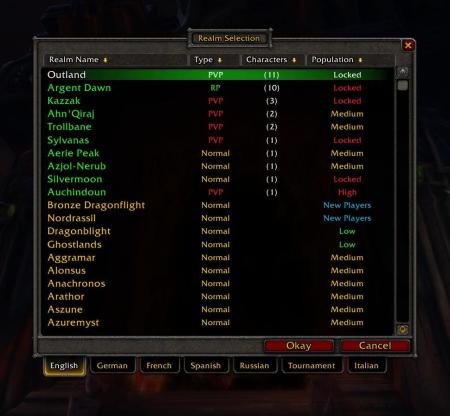 Me: I’ve personally just switched to EU realms from the NA realms and some people I know are thinking of doing the same. Culturally, what do you think the cultural differences are between the two? What EU realms do you recommend for people to play on?

E – I’m not sure that it’s a fair comparison because the US realm we played on was pretty quiet (especially with the time difference) whereas we play on Argent Dawn EU, which is really busy and vibrant. And an RP server of course!

T – So I would definitely recommend an RP guild, whether or not you have any plans to RP. Culturally, there’s more a mix of different languages on EU realms than US ones but nothing too noticeable to be honest. Everyone looks the same when they are dancing on a mailbox!

Me: Since you guys have become known for predicting content and patch dates, do you think that the Undercity will revert back into a human city for alliance use during BFA or do you think it’ll just be a pile of rubble and plague?

E – SPOILERS, but it’s looking like Sylvanas and her blight cannons are going to be leaving that place pretty ruined during the horde retreat…

T – Yeah it doesn’t seem like it’s going to be in any fit state for people who breathe air unfortunately. Having said that, I’d love to see them do something with Calia Menethil (Arthas’s sister) during the whole Siege of Lordaeron or its aftermath. I feel like she needs to be there in some capacity, even if just a small one.

Me: Aside for the Weekly Reset, what plans do you have for new content? Could we see more Taliesin Talks? How about the Evitel Cooking Segment we discussed last year?

T – We have started doing a few more Taliesin Talks recently actually, they are quite a good format for new alpha topics that we want to talk about, are a bit too big for a Weekly Reset segment but not quite substantial enough for a whole other essay video. And as for Evitel’s cooking…

E – We did some cooking on Preach’s Christmas special video and it was HARD! Seriously. Also, Hazelnutty Games does a really good stream where she cooks from the WoW cookbook and honestly, she’s just perfect and I don’t think we could really add much to that.

T – She hasn’t got Khadgar though has she?

E – Khadgar has no hands, he’s terrible with a whisk.

Me: Due to your growth as a channel, we’ve seen you meeting up with other WoW Youtubers, getting recognized by Blizzard Entertainment and set up an online shop. How does it feel to be at the point you are now? What was the journey like from the start of the channel to the present?

E – It grew so quickly and steadily that we never really had a moment of, “Oh, this is HAPPENING”. It just sort of… happened. We’re so busy all the time that we don’t really think about it, and our channel is tiny in Youtube terms, it makes you think about those people who suddenly get, like, a million subscribers in a year and how crazy it must be for THEM! It’s been total fun though.

T – Yeah we’ve been really lucky. It doesn’t seem all that different now to this time last year to be honest, but sometimes I find myself at home working and it kind of dawns on me how lucky I am to have had all the great experiences that we’ve had in the last 18 months, and to be doing this as a job. 10/10 would Youtube again.

Me: Do you believe that Youtube as a platform will be able to support creators despite all the adpocalypse talk that has become commonplace?

T – That’s a pretty delicate subject. I will say that our Patreon has become very important for us in terms of keeping the channel afloat. The idea that you can choose to support your favourite creators in that kind of way is pretty amazing really and I suppose gives some hints n how media might be consumed in the future. It’s all really interesting.

Me: Do you guys believe that the creation of WoW communities in Battle for Azeroth will make services like Discord irrelevant?

T – No, because if you’re anything like me then you’ve got about a million different discords from about 100 different games and communities all in one place there which is something that the WoW communities can’t match (and isn’t trying to match).

E – Yeah, but then anything that makes communicating in-game easier and more standard is a good thing. So, not everyone who plays WoW has Discord but you know everyone who plays WoW WILL also have access to the WoW voice chat and communities, so it standardizes and normalizes the idea of, say, a group chat channel to people that may have been hesitant before because it involved third party software. So that’s great! As long as it works.  Because when they tried it before, it kind of didn’t.

T – To possible new viewers; Hello, sorry in advance that’ll it might take you a couple of videos to start getting all the jokes.

E – To longstanding fans; Hi. We’re sorry you’ve been through so much horror. If you can just stick it out a bit longer then I promise it’ll get better soon.

T – I don’t think you can really promise that.

E – You’re right I take that back. Sorry for the horror.