A pretty big grouping of new releases this week. I’ll start with the most odd release, Cook Off! The film stars Wendi McLendon-Covey of The Goldbergs, Melissa McCarthy, Niecy Nash, Diedrich Bader and has a ton of cameos in it. You’re probably shocked you’ve never heard of this movie. Well here’s the thing about it, it’s actually over a decade old. Before I wrote professionally, I lived in Los Angeles to try to get into the movie industry. In 2006 I saw a test screening of this movie and thought it was kinda funny. It’s a mockumentary (fake documentary style) film with some people who would eventually become big house hold names. But the movie sat and sat and sat. It got a limited release in 2017 and finally finds itself on home video. Rewatching it on Blu-ray, it’s an odd watch. It made me laugh at times, but with the talent in it, it should be way better. There’s a much better movie somewhere in it, but as is, it’s not what you expect from a comedy with two Bridesmaids cast members. Bader was probably the biggest name at the time because of The Drew Carey Show and the film should have just let the talent improv the movie. Most come from the improv scene and others from that scene like Ben Falcone and Jim Rash also appear. If this was released in 2007 there wouldn’t have been much expectations, but McCarthy (who barely has scenes) and McLendon-Covey have skyrocketed in the past ten years. I did find myself laughing at times, but you definitely expect a different film because of the (now famous) names involved.

Second is another movie with a big cast, Agatha Christie’s Crooked House. Like most Agatha Christie adaptations, this film is good, but suffers in length. It has a cast including Glenn Close, Terence Stamp, Gillian Anderson and Christina Hendricks, but it’s close to two hours long and it shouldn’t be. If it came in around 95 minutes it would have felt tighter and more coherent. I did like the person who caused the deaths and didn’t guess that person right away, but it felt so drawn out and slow. It tries to trick the audience and get them believing one person or another, but it suffers because of it. The cast is great including the young actress in it, but I did find myself looking at the clock a few times to see how much longer it had left. Fans of Agatha Christie adaptations should like it though.

Next is Alibi. This three episode mini-series premiered years back and overall I did like it. I didn’t realize it was only three episodes so the ending didn’t quite do it for me though. A waitress has to go back to a home to pick up her bag she left behind and sees the host with a dead body. She freaks out, but it’s not exactly what it appears. As the episodes move on, you see money involved, an affair, and much more. I thought it was paced well and it doesn’t outsmart itself. Only being 3 episodes it flies right through, but again, I’m not sure if I like the ending. The case itself is solved, but I don’t like how the three main characters end. If you remember it or missed it the first time, check it out.

With a new version of S.W.A.T. currently on TV we get two releases of older versions. Out now is S.W.A.T. The Complete Series. This is the original show that had Robert Urich in it. This is one of my mom’s favorite shows of all time. From TV icon Aaron Spelling, the show didn’t run that long, but had a lasting impression. Even though it only lasted 37 episodes, the show had some big time TV directors and cameos in it. Leslie Nielsen was in a few episodes. Robert Loggia and Loni Anderson as well. It’s a great package from Mill Creek and if you are a fan of the show, I highly recommend this Complete Series collection. 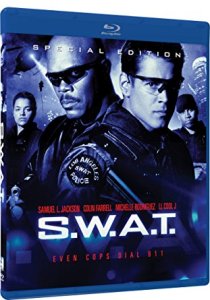 Also from Mill Creek is a new Special Edition Blu-ray of the film version of S.W.A.T. from 2003. This starred Colin Farrell, Samuel L. Jackson, LL Cool J, Michelle Rodriguez and Jeremy Renner. I actually think it’s an underrated flick. It has some great action and I thought it was better than the Miami Vice movie remake. It was a pretty decent hit at the box office and I can watch it again and still be entertained. The script and dialogue are pretty cliched, but the action scenes are good. Farrell and Renner would go on to do much better work, but this is a sleeper film in my eyes. I hadn’t seen it in years and forgot a lot of it so I was glad to get this for a rewatch.

Next is the pretty obscure Yor: The Hunter from the Future. This Mill Creek release is a 35th Anniversary Blu-ray edition of a film I either never saw or forgot all about. If you like cheesy 80s foreign action films that are “So Bad It’s Good” then pick this up immediately. It makes Flash Gordon (the Sam J. Jones edition) look like Citizen Kane. Yor looks like a cavemen and is surrounded by others who look like cavemen and cavewomen yet he’s actually from an advanced race. That race has androids and laser guns and it’s hysterical watching people with sticks and arrows taking on androids and blasters. Oh and there are dinosaurs and cheesy effects and awful production value. But I’d be lying if I said I wasn’t highly entertained. It’s not a good movie, but I found myself laughing at it and enjoying the ridiculousness of it. The continuity issues and errors are laughable. Yor has his club broken at one point then it’s right back together. The medallions change from having a bone to not having a bone and much more. If you remember the film, pick up this new edition. If you haven’t seen it and enjoy schlock, I highly recommend it.

Speaking of schlock, Mill Creek also has out Street Sharks: The Complete Series. I remember my nephew watching this cartoon. This 1990s animated show is pretty much a Teenage Mutant Ninja Turtles remake with teens as sharks instead of turtles and coining the phrase Jawsome. Yep, Jawsome. They fight crime and had a main enemy, Dr. Paradigm. Like TMNT there were toys and all kinds of stuff. Watching it now, it doesn’t seem to have aged well, but I didn’t grow up with it so there’s no real emotional connection for me. If you grew up on the show, you might feel some nostalgia which is what I expect out of a release from this.

Sticking with Mill Creek releases we have Hollywood’s Greatest Screen Legends. This 4 disc collection features 25 of Hollywood’s best leading men and 25 of its best leading ladies. From John Wayne and Cary Grant to Grace Kelly and Ava Gardner. This documentary takes a look at their careers and their personal lives. It’s over 20 hours of stories about Marilyn Monroe, Paul Newman, James Dean, Judy Garland, Bette Davis and much more. This is when Hollywood meant something and legends were legends. I enjoyed this quite a bit and it’s a nice trip down Hollywood’s memory lane.

Next is The Durango Kid Collection. If you read me, you know I grew up watching westerns because my parents love them. Charles Starrett held the record for appearing in the most films when he retired. This collection has 10 films as the masked vigilante The Durango Kid. Even for westerns these are definitely B-movies. But they have what I want in a western, great scenery, luscious backdrops, long swooping shots, the hero saving the day and more. I remember seeing Laramie before, but the others seemed new to me. If you are a fan of franchise, this is a nice little collection to get a hold of.

Almost done, I promise. Next is America’s Treasures, a 12 part documentary series. It’s over 5 hours long and showcases 25 monuments from the US. The scenery is breathtaking and makes me want to visit places I’ve never been to before. A few years back my parents took a cross-country trip and crossed off a lot of these places. With their stories and now seeing this, there are definitely places I wouldn’t have considered till now. There are your typical spots like The Statue of Liberty and Mt. Rushmore, but also some obscure ones I wasn’t familiar with. This is just absolutely beautiful and makes you want to get on the road and find adventure. If you can’t feel something while watching this, there is something wrong with you.

Second to last is The Commander: The Complete Collection. I actually wasn’t familiar with this show until this box set came my way. This 17 episode collection features Amanda Burton as Clare Blake, a 20 year police vet. It features other actors like Hugh Bonneville, James D’Arcy, Brendan Coyle, Greg Wise, Celia Imrie and more. What I liked about the show is that Blake feels human. She makes mistakes. She shoots herself in the foot. She’s her own worst enemy. Hell she even sleeps with suspects. She has two major sidekicks throughout the series. I couldn’t sit down and binge this entire collection at once, it’s a big series, but it flows really well. The pacing is pretty fast like you expect in a police procedural. If you like the show, definitely pick this up, If you are like me and aren’t familiar with it, but like British crime dramas, you will enjoy it. It has good acting and storytelling.

Last is Blue World Order. Now this isn’t a DVD or Blu-ray, but it  will premiere nationwide January 16th on Cable and Digital VOD, including iTunes, Amazon Instant Video, inDemand, Dish and more. There is a lot about the film I want to like. It’s a post apocalyptic film and I like the genre. It has a retro feel with DeLoreans and cheesy effects. It has Billy Zane in it and I like him. Unfortunately it’s just very generic. That’s the best word to describe it because there’s nothing new, original or different about it whatsoever. Read its synopsis: After a nuclear war decimated the Northern Hemisphere, the surviving population was infected with a deadly bacterium. In an attempt to rebuild civilization, a self-appointed government called The Order distributed an immunization to the bacteria, which inadvertently killed all the children. Only one man, Jake Slater, remained immune. The only child that survived is his daughter, Molly. Now, Jake scavenges the wasteland searching for a way to keep her alive, unaware that she is the key to the survival of humankind. Is there anything unique about that? Nope. The production value is shady. The lead actor isn’t very good. The backdrop and setting are cool and good places for a post-apocalyptic setting, but the movie is just so meh. I don’t even know if it makes sense. The immunization freezes people at times and the lead can make people stop or something. I don’t know, I lost interest at one point. Billy Zane shows up out of the blue towards the end and has a bigger role than expected. The fight sequences aren’t good either. I wanted to like it, but this sci-fi flick just didn’t do anything for me.