A slew of releases this week and I’ll start with the biggest name, Despicable Me 3. I’m a big fan of this franchise and of Illumination Studio’s other films as well. As for the latest film, it’s not quite as good as the first two films, but the kids will surely like it and it did gangbusters at the box office because of it. It starts out a bit slow especially compared to the previous films, but once it gets going, it’s a lot of fun filled with lots of pop culture references from the 1980s. The film revolves around Gru and Lucy getting fired from being secret agents after a diamond is stolen by Balthazar Bratt, a former child star turned villain after hitting puberty and having his show cancelled. Gru learns he has a twin brother named Dru and with Lucy and the girls joins Dru at his mansion. He learns that Dru is a villain like their father, but not as good. The brothers team up to get the diamond back and beat Bratt once and for all. The Minions have their own adventures and wind up in prison and escaping to help Gru. The girls get plenty of screentime as well with Margo having a boy interested in her and Agnes thinking she found a real life unicorn. There is singing and dancing and it’s colorful and fun. The movie looks AMAZING on home video so if you missed it at the box office, the home video is well worth getting. Like the other films this also comes with a Mini Movie and is just a lot of fun for the whole family. It might be the weakest of the 3 films and I liked The Secret Life of Pets and Sing more, but you really can’t go wrong with these movies. I like them a lot and so will your family, highly recommended. 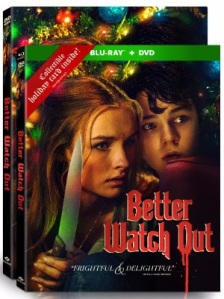 Next is Better Watch Out, a horror Christmas movie. There are good horror holiday movies and there are terrible horror holiday movies. This one is pretty decent. Overall I liked it and recommend it, but for some reason I was expecting a totally different movie. I had seen a trailer and thought it was going to be a Home Alone meets home invasion horror mix. It is, but it isn’t. There is a BIG twist so it’s hard to explain what I mean. It starts out with a teen boy being babysat by a hot older teenager he has a crush on. Weird things start happening around the house and I’m expecting it to go closer to Scream or You’re Next, but the twist totally shifts it. I honestly didn’t see it coming and I respect that. I don’t know how believable it is, but I can see a lot of people enjoying the film. I can see myself watching it again even knowing the twist so that’s a good thing. The leads are all pretty good and teenaged babysitter is what you want in a movie like this, hot and yelling. If you’ve seen the trailer you really haven’t seen the movie and that’s a good thing. Check it out if you need a decent horror flick for Christmas.

Just in time for the holidays, Houston Astros fans can celebrate their World Series championship again with two new releases. Even though I’m a born and raised Red Sox fan and this Astros team beat us, I still respect the team and enjoyed these releases. This features the 90 minute edition and the Collector’s Edition that has all 7 games from the World Series and the complete American League Championship Series. For baseball fans, the Astros vs Dodgers 2017 World Series was one for the history books. It was amazing. It featured some of the best pitching we’ve seen in years and some great young stars including Jose Altuve, Alex Bregman, Carlos Correa, Dallas Keuchel, Lance McCullers Jr., and World Series MVP George Springer. It was one of the best World Series of my lifetime and these releases are must own for Astros fans. The Astros were a fun team filled with players you could root for even if you supported another team. A late season trade for Justin Verlander put them over the edge and helped them win their first World Series championship. As a biased Red Sox fan, our 2004 championship was way better, but this was a hell of a World Series battle that baseball fans will be talking about for generations. A must own for Houston fans.

Some documentaries are next. First is Angry Inuk, a look at how PETA, Greenpeace and other organizations are destroying the economy and survival of the Inuk people in Canada. Animal activists care more about animals and making money than humans and this proves it. On face value saving seals from being wiped out sounds great in theory. But like most ideologies, there are consequences liberal tree huggers don’t consider. The Inuk people depend on seals not only for food, but for financial reasons. They can sell seal skin to clothing companies to put money in their wallets and put gas in their tank. They aren’t killing seals just to kill seals, but the meat is healthier than what most people eat and their local economies need every bit of the animal to survive. The animal activists don’t respond to any of the filmmaker’s questions and the Inuk people go to Europe to try to fight, but can’t compete with the hundreds of millions of dollars PETA and the others have. People who only see the white baby seals on PETA signs need to learn the truth. No one is killing those animals, they have been banned for decades. The Inuk use the seals to survive and at no point have these seals been considered endangered.

Karl Marx City is also out this week. The documentary is about a woman whose father committed suicide and she wants to know why. She grew up in Karl Marx City, Germany and her father was under the watch of the Stasi. It uses interviews of her family and former Stasi members and old footage kept in Stasi records. For those idiots today who think Socialism is great, they should watch this and hear the stories of what it was really like growing up under Socialism and how Germany changed after the fall of The Berlin Wall. The family learns that those they considered friends might not have been friends and that not all answers are possible. I was blown away at the volume of records that were still available and how much the Stasi did to its own people. We here in the US think the CIA and FBI are bad, but they are angels compared to the Stasi. Everyone was under investigation and your neighbor could have been ratting on you the entire time. Pretty interesting stuff on a time where information was power and that information never went out to the public.

The next documentary is Maurizio Cattelan: Be Right Back. Cattelan is a contemporary artist which means he takes junk and makes it controversial. I’ve never heard of him and didn’t like any of his work. Wow, three hanging kids from a tree, how hip. I don’t understand most art especially contemporary and post modern art. It’s all weird for the sake of being weird to me. Even though I didn’t like his art I have to give the guy some credit. Not knowing anything about the man, I had no idea about the huge twist in the documentary. If you don’t know about him, I won’t spoil it, but wow, definitely didn’t see that coming. Other than that, it was just a bunch of pretentious people talking about art that does nothing for me. His works sell for millions of dollars to people who buy it just to say they did and then use it as an investment. He’s been around since the 1990s and art people probably know who he is, but I didn’t. Big ups for the twist, but the rest of the movie didn’t change my mind about him or the art world.

Speaking of doing nothing for me and something I didn’t understand,

The White King is next. I have no idea the point of this movie or why it’s even called The White King. It seems to be a post apocalyptic film or maybe it was a cult, I have no idea. The synopsis is this: Djata is a care-free twelve-year-old growing up in “The Homeland,” a totalitarian state shut off from the outside world. Filled with Big Brother-like surveillance cameras and propaganda posters, the agrarian community at first seems peaceful and orderly, kept safe by an enormous statue dominating the landscape. But when Djata’s father, Peter is whisked away to a deadly work camp, the young boy and his mother, Hannah are labeled traitors and forced to navigate a world of propaganda, abuse and secret police. Before his father was taken away, however, he passed a secret to Djata that could change everything. That’s all true, but there’s no explanation how The Homeland came about. There’s no real explanation why the father is taken. The grandfather seems to be someone of importance and there is a rich general type, but none of it made any sense. If it was trying to be a YA dystopian film it missed badly. If it was trying to be a post-apocalyptic Orwellian film, it also missed badly. I didn’t get it. 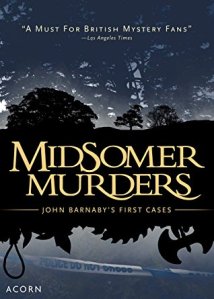 Last is Midsomer Murders John Barnaby’s First Cases. This collection includes Series 14 and 15 when John Barnaby (Neil Dudgeon) takes over as Midsomer County’s new Detective Chief Inspector. It has 14 mysteries from a series I’ve really grown to enjoy over the past year or so. I never watched the show until the DVDs starting coming my way and I quite like them. The show is a great break from US dramas which are very pandering and straight from the headlines. These are fun and not as serious. Ok, murder is serious, but the mysteries always have a twist and whodunit type writing. Neil Dudgeon is great and easily fits in as a TV sleuth. If you’ve never seen the show, but enjoy Sherlock Holmes type stories, do yourself a favor and check out Midsomer Murders. They are an easy binge and you’ll find yourself 2 or 3 episodes in very quickly. The show has great production value, great costuming and set design and even better acting and writing. American TV feels so dumb and “now” a lot of times and 2-3 years later feel very dated. I’ve gone back and watched older episodes of Midsomer and even episodes that are years old still feel fresh and easy to follow. If you are already a fan of the series, this collection is a must own. Highly recommended.