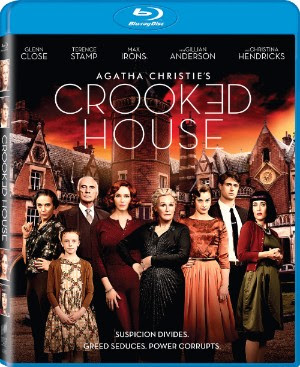 The CROOKED HOUSE Blu-ray is loaded with three behind-the-scenes featurettes, giving fans an inside look at the making of the film. With twists, turns and a cast full of characters, it can be difficult to decipher who is truly the murderer. In “Whodunnit? – The Characters of Crooked House,” the cast explains who’s who and explains their involvement in the larger mystery. Shot in a wide array of beautiful British stately homes, fans come to understand the decisions behind this impressive visual style as production designer Simon Bowles walks them through the design of the film in “Elegance & Innovation: The Design of Crooked House.” “Agatha Christie: A Timeless Fascination” finds the cast and crew, along with Christie’s grandson Mathew Prichard, divulging why her stories are so enduring and share the particular appeal of this unique tale.

Synopsis:
In Agatha Christie’s most twisted tale, the suspicious circumstances surrounding the death of a wealthy patriarch is investigated by spy-turned-private-detective Charles Hayward (Max Irons), who is lured by his former lover to catch her grandfather’s murderer before Scotland Yard exposes dark family secrets. On the sprawling estate, amidst a poisonous atmosphere of bitterness, resentment and jealousy in a truly crooked house, Hayward encounters three generations of the dynasty, including a theater actress (Gillian Anderson), the old man’s widow 50 years his junior (Christina Hendricks), and the family matriarch Lady Edith de Haviland (Glenn Close).

CROOKED HOUSE has a run time of approximately 112 minutes and is rated PG-13 for thematic material and some sexual content.