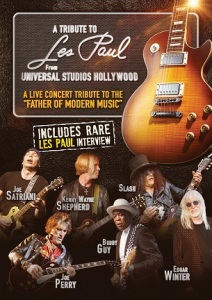 Up first we have A Tribute To Les Paul: Live From Universal Studios Hollywood. This came out earlier in the month and is a mix of interviews with the legendary Les Paul and concert footage featuring some of the great guitarists of our time. Les talks about building his first guitars with leftover wood and metal. The musicians talk about how he influenced music and their own careers. I wanted to see it because Kenny Wayne Shepherd is one of my favorite musicians and he closes out the show with Steve Lukather & Edgar Winter performing Rock & Roll Hoochie Koo. The other performances are Superstition (Slash, Steve Lukather, Edgar Winter), Little Wing (Steve Lukather), Watch Boogie (Joe Satriani), House Full Of Bullets (Joe Satriani), Going Down Slow (Joe Perry, Buddy Guy),Hoochie Koochie Man (Joe Perry, Buddy Guy), Lovin’ Cup (Robben Ford), I Wanna Know You (Neal Schon, Shayna Steele). I was hoping it would be longer, it’s only about an hour and 19 minutes, but the performances are good and it’s always great hearing the late Les Paul talking about his work. Blues fans will eat it up. 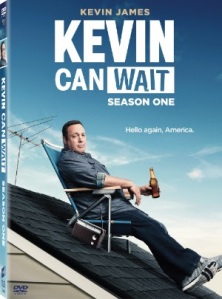 Kevin Can Wait Season 1 also came out earlier in the month, but I didn’t get it on DVD till recently. Kevin James’ return to TV is exactly what you expect. The show feels a lot like The King of Queens, but that show made him a star so I guess don’t fix what ain’t broke. This time James is a retired cop who has more issues at home than he did on the job! It’s nothing original in the slightest, but it’s good background noise. I know some Kevin James fans who like the show and CBS will certainly keep it around. I don’t see myself watching it when it airs, but I didn’t mind binging it on DVD. I can see that happening every year. It’s going to get even more like The King of Queens as Leah Remini replaces Erinn Hayes on the show. The Gag Reel in the bonus features was really good though. 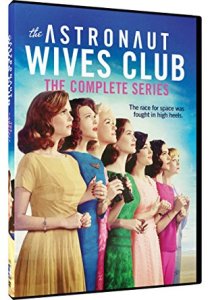 Third we have The Astronaut Wives Club: The Complete Series. This short-lived show was pretty solid. It had a good cast which helped and I liked it. It was an interesting look at a time in the US that I didn’t live through. Space was big back then and not only did the Space Race make their husbands famous, but the wives gained popularity as well. I never read the book so I can’t tell you how similar the series is to that. It’s every bit a soap opera, but it has some history as well. If you were familiar with the show, this Mill Creek release came out last week at a bargain price. 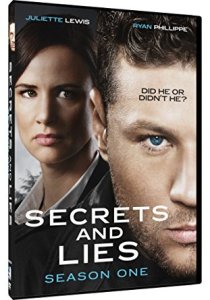 Sticking with Mill Creek, they also released Secrets and Lies Season 1 last week as well. Season 1 involved Ryan Phillippe as a Good Samaritan turned murder suspect after he discovers the body of his neighbor’s son in the woods. Juliette Lewis plays the detective investigating the death. It reminded me of The Missing in that each year the story changes, but has one character connecting both (Lewis). Also, this is obviously the American version and not the Australian one. Phillippe is a better TV actor than film actor to me and this show lead to Shooter.

Pool Party Massacre is next. I wanted to love the film, but it has some issues that hurt. It’s a throwback to the horror I grew up with, but unfortunately it has some bad acting. The people in it really bothered me and it’s a shame because the ending and gore are great. The kills are completely fantastic. Seriously, it might be worth seeing because of the kills. The killer murders each person with a different weapon and there is a ton of blood and gore. I appreciate that, good work! I also really liked the ending. Ever since Scream we’ve seen an attempt at surprise endings in horror and most simply don’t work. This one does. It doesn’t try to outsmart itself, but it’s also not dumb. There is a twist and turn and it doesn’t feel forced. It actually makes sense and helped the movie a lot. I understand lower budget horror films can’t always afford good acting, but man do I wish this had better actors. There are all vapid, one-dimensional actresses that are nice to look at, but I wouldn’t be surprised if I never hear from any of them again. But the kills and ending saves the movie a lot. 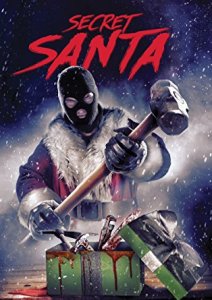 Last we have Secret Santa, another horror movie with a good ending and kills as well. Some college friends throw a holiday party to help release some tensions during exams. They get each other Secret Santa gifts, but when they realize their gifts have been switched, they realize something is going on. The killer, like the previous film, makes sense. There’s a reason for all the violence. Sure the acting might not be great either, but the kills are and the ending works. If you have a soft spot for slasher flicks like I do, you should like this and the previous film.