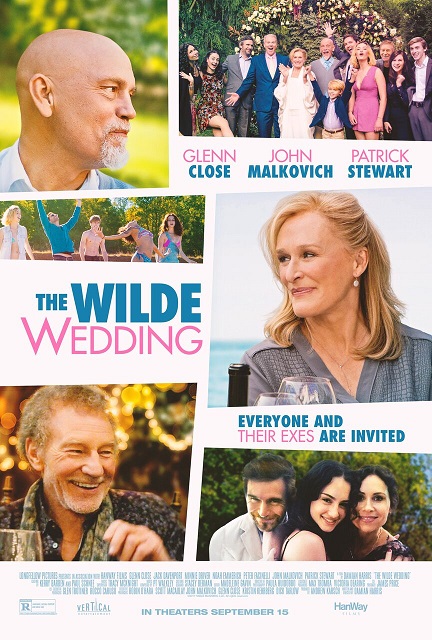 The Wilde Wedding isn’t anything original, but it’s nice to see an attempt at movie making for an older generation. We’ve seen families coming together for a wedding done hundreds of times before, but the cast is good and makes it more watchable than it has any right being.

Glenn Close is getting married for the second time. This time to Patrick Stewart. She was married to John Malkovich and has children with him. Stewart has his own children and they all get together for the first time right before the wedding.

I think without the talent involved the film probably wouldn’t work. Along with the three leads, the supporting cast includes Minnie Driver, Peter Facinelli, Noah Emmerich and more. Driver plays a singer. Facinelli plays the good looking bachelor type. Again, nothing overly original with any of the characters, but there is too much talent for it to be unwatchable.

You should probably see the ending coming. Even the poster hints at it. I’m not sure how big of a release this is getting so you might not be able to find it in theaters. You’ll probably have better luck when it ends up on VOD, streaming and home video later on.

I wanted a bit more from The Wilde Wedding, but overall it’s not bad. Stewart and Malkovich have some funny scenes together and it’s good seeing a movie about older people for older people. Usually you get jokes about older people not knowing how to use technology and all that nonsense, but this doesn’t go for the easy laugh. I respect that. The characters are age appropriate, but still talk about love, sex and more. It’s a good movie for your parents.