New Blu-ray & DVD releases for the week include some television releases, some Disney, some action and Salma Hayek. 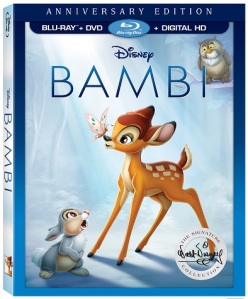 Up first is Disney’s Bambi. I hadn’t seen the film in decades and watching it now it was a mixed bag for me. Disney films today combine pretty colors and characters with music for the kids, but usually some jokes or storylines that go over kids’ heads because they are geared towards adults. Bambi is definitely for the kids. There’s nothing wrong with that and the film is a classic for a reason. Other than (spoiler) his mom getting killed, the film is wholesome and sweet. We watch young Bambi grow and learn with his friends Thumper and Flower as he becomes an adult deer and falls for Faline. The animation is fantastic as is the music. The fire sequence at the end is much more than I remembered. I guess I’m too used to the past 25-30 years of Disney films which gave adults something to watch along with their children. Children will absolutely love this new Anniversary Edition Blu-ray though. The music sounds great and the coloring is beautiful. Plus there are all kinds of cool bonus features including the short “Oswald the Lucky Rabbit” and deleted scenes. The story is pretty timeless as well. 75 years later (the film was released in 1942) we still have man burning down the forests with no concern for wildlife. 75 years later we still like stories about animals and first love as well. If you have a family pick up this new edition and enjoy a classic with your young ones. 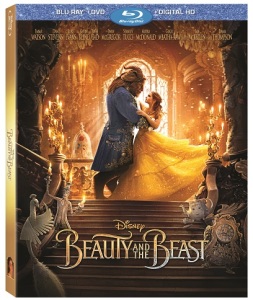 Sticking with Disney, also out this week is their live-action Beauty and the Beast which was huge at the box office. As of this writing I haven’t received my Blu-ray in the mail yet, but I did see the film at the theater so I’ll base the review off of that. Like Bambi, I hadn’t seen the animated version of Beauty and the Beast in decades. I knew it had songs like “Be Our Guest” and “Beauty and the Beast”, but I don’t remember it having as much singing and dancing. This film is practically a musical and I wasn’t expecting that. Fans of the animated film are probably shaking their heads at me. As for the cast, Emma Watson makes for a good Belle. She won’t be confused with Adele, but her singing is good enough for a film like this. Dan Stevens plays the Beast and from what I was told not only did he act opposite Watson on stilts, but also redid the scenes with motion capturing for his facial expressions. That’s commitment right there. You always know you’re getting good performances from Kevin Kline, Stanley Tucci, Emma Thompson, Ian McKellen and Ewan McGregor and this is probably Luke Evans’ best performance of his career. There was some controversy about Josh Gad’s character being gay, but if I didn’t know about the controversy I wouldn’t have even realized he was gay. It did $1.2 billion (yeah with a B) at the box office worldwide and this Blu-ray release will be big as well. It is packed with bonus features about the music and production along with deleted scenes. If you saw it at the theater you’ll want to own it at home. If you missed it at the theater and are a Disney fan, check it out this week.

Sticking with kids/young adults movies, third this week is Enter the Warriors Gate. I wanted to like this one a lot because I like Asian/martial arts films and Dave Bautista is in it, but it’s a bit too childish for me. It’s closer to A Kid in King Arthur’s Court than it is a Donnie Yen film. A nerdy, teen gamer, Jack, gets an old chest which transports a princess into his world. Bad guys follow her and bring her back through the chest gate. He chases after them and finds himself in Ancient China. There he teams up with a soldier and wizard to rescue the princess from Bautista. I appreciate the effort to bring Asian culture to a younger audience, but I do wish it wasn’t so clichéd. The princess goes to the mall and dances and eats ice cream like a teenaged girl would. Jack is bullied and finally fights back. Bautista is your classic Barbarian type and the wizard is your comedic relief. The costuming and set design of the Ancient time period are great though. The action sequences are ok and I guess the film is a good introduction to Asian customs and martial arts films if you have pre-teen/teen kids. I expected more from Luc Besson who wrote it though.

Next is Stan Lee & Kevin Smith Save the World. This is a collection featuring An Evening with Kevin Smith, An Evening with Kevin Smith 2: Evening Harder and Stan Lee’s Mutants, Monsters and Marvels. Being a Kevin Smith fan since first seeing Clerks in the 1990s I enjoyed his Evening with films. They are Q&A sessions the writer/director did earlier in the 2000s. Think of them as his own version of TED Talks. The first film features him on a college/university tour and the second film is him in London and Toronto. Stan Lee’s Mutants, Monsters and Marvels is a good film to learn about the decades of work the iconic Stan Lee has done in the comic book world. I liked this because of the old photos shared in the film. Lee discusses with Smith his life and what it was like bringing to life some of the biggest names in Marvel history. Obviously the more you are a fan of Kevin Smith and/or Stan Lee the more you’ll enjoy this collection. I’m a fan of both so I liked this quite a lot. 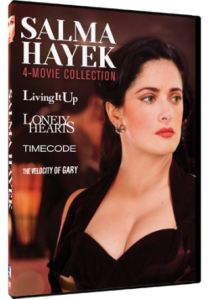 Fifth is Salma Hayek 4-Movie Collection from Mill Creek. This features Living It Up, Lonely Hearts, Timecode and The Velocity of Gary. I have to say it’s a pretty odd collection of films I was not super familiar with. The first film is about a bus driver who wants to commit suicide. A man convinces him to borrow money from the mafia and do everything he wants to do before he kills himself. He falls for a waitress and decides to live, but now must pay back the mob. Lonely Hearts is based on the Lonely Hearts killers who used personal ads to steal from and kill rich women. Hayek and Jared Leto play the killers and the film also stars John Travolta and James Gandolfini. I think I had seen this one before, but it had been many years. Timecode was pretty unique because it tells the same story through four different cameras with no edits or retakes. It has a pretty big cast including Stellan Skarsgard, Saffron Burrows, Xander Berkeley and of course Salma Hayek. It’s worth watching because of how it was made. Last is The Velocity of Gary starring Hayek, Vincent D’Onofrio and Thomas Jane. D’Onofrio plays a former porn star who is diagnosed with HIV/AIDS and his girlfriend (Hayek) and boyfriend (Jane) must put away their differences to take care of him. I do not remember ever hearing about this film never mind seeing it before this weekend. D’Onofrio is really good, but the film is quite slow at times.

Last we have Wentworth Season 3. If you’ve read my reviews before you know I enjoy this show way more than its American counterpart Orange is the New Black. For some reason I find these characters much more engaging. Season 3 finds Bea returning to Wentworth for the murder of Brayden Holt where the governor has revoked a lot of privileges including smoking. The season is pretty solid with a lot dealing with Bea and Governor Ferguson’s back and forth. Ferguson has her kidnapped and sent to a psych ward. Bea gets out and tells everyone the kidnapper wasn’t an inmate or worker there and LSD proves she wasn’t nuts. The prison is set on fire and the season ends with that outcome. I find the show way more authentic than OITNB which just doesn’t feel realistic to me. If you are a fan of the show definitely pick up Season 3 this week.