Writer/director/producer M. Night Shyamalan returns with an original thriller that delves into the mysterious recesses of one man’s fractured, gifted mind. Though Kevin (James McAvoy) has revealed 23 personalities to his psychiatrist, there remains one still submerged who is set to materialize and dominate all the others. Compelled to abduct three teenage girls, Kevin reaches a war for survival among all of those contained within him – as well as everyone around him – as the walls between his compartments shatter apart. 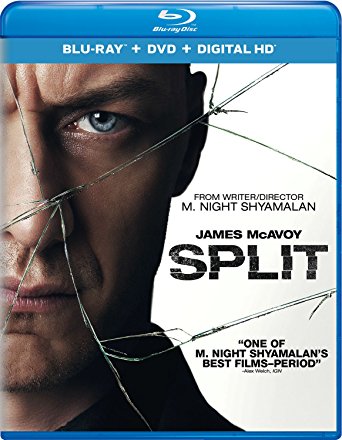 Split was a solid hit at the box office, but I can’t tell you why. James McAvoy is the only good thing about the film. Even his good performance couldn’t get me to watch the movie ever again though.

I’ve never been an M. Night Shyamalan fan. Signs is the only movie of his I would ever consider rewatching. I thought The Sixth Sense was a joke and had no idea how anyone didn’t see that coming. I stopped watching his films for a while, but for some reason saw The Visit last year. I hated it. I didn’t want to see this, but I’m a big McAvoy fan so I watched it for him.

It’s a shame his performance is wasted in this ridiculous movie. He’s pretty fantastic jumping from one personality to the other. His mannerisms and different accents are perfect. He gives 100%, both physically and mentally. A different director using the same plot and McAvoy’s performance would have made a better film to compete against Jordan Peele’s Get Out as the thriller of the year.

Unfortunately M. Night goes with his trademark twist angle that only surprises stupid people. They talk about Kevin having maybe one more personality that will come out and they tell you what it’s going to be in like the first 20 minutes of the movie. When the personality comes out, McAvoy is fantastic, but it adds nothing to the actual movie. If you couldn’t see this entire movie coming, you need to take a look at the decisions you made in life because none of this is surprising or good.

They also flashback to a younger version of Casey (one of the kidnapped girls) and you sit there hoping the flashbacks pay off. It does, but isn’t necessary. They could find another reason for what happens to her in the end. The flashbacks just feel like tacked on “trigger” scenes to add emotion and depth to a story that didn’t need it.

The concept of a man with multiple personalities is intriguing and should work as a film. Add in a solid performance from the actor playing the multiple personalities and again, it should work as a film. Unfortunately M. Night does his M. Night thing and Split did nothing for me. I don’t understand how McAvoy’s character would never be found where he was nor does it really explain why he kidnapped the girls in the first place. There’s a great scene at the end that’s a throwback to a previous M. Night film. I won’t ruin it, but besides McAvoy’s performance, it was the only thing I enjoyed about the film. I’m baffled at how people liked this film.