New Blu-ray & DVD releases for the week include some television releases, some real horror, action and suspense.

First we have The Take starring Idris Elba and Richard Madden of Game of Thrones fame. Madden plays a pick-pocket in Paris who accidentally steals a bomb that goes off. He gets labeled a terrorist being hunted by Elba, a CIA agent and the French as well. It’s a pretty solid action film and Elba does some solid fight sequences. We here at The Nerds Templar are big fans of his so it’s cool seeing him doing more action. Both him and Madden fit their roles extremely well and there’s a nice twist on who the actual “bad” guys are. I also LOVED how easily people can be manipulated especially the protesters. Everything they protested, all their signs and sayings were manipulated by the bad guys as a rouse to cover up what was really happening. The bad guys literally created hashtags online to rile people up and the crowds allowed them to do what they were really doing. In today’s overly political climate, it makes you wonder if all the protesting and marching in the US is genuine or if people are being played for fools. Fans of Elba should definitely check out the film and if you like the Jason Bourne series, you will like this. I recommend it.

Sticking with action, next we have Beyond Redemption. If you read us frequently you know how much we enjoy and support Asian film especially martial arts movies. I was a little disappointed in this one to be honest though. It has good bones, but just doesn’t get to where it should be. I think the difference here is because it’s not a full-blown Asian film. I believe it’s from a Canadian director and was made in Canada and it suffers because of that. There is some good fight sequences, but it’s lacking compared to a genuine Asian martial arts film. They speak English and the dialogue is very clichéd and Hollywoodized. It has guys in it we like like Osric Chau (Kevin Tran in Supernatural) and Brian Ho, a stuntman in some of the biggest blockbusters of all time, but it felt too Hollywood action than Asian action. The story isn’t bad though. An undercover cop gets stuck in kidnapping a Triad boss’s daughter and must stay undercover to close the case. If you aren’t as familiar with Asian action crime dramas like we are you might like it, but I wanted a lot more from it.

Next is some real horror. From The History Channel comes Frankenstein The Real Story and The Real Wolfman. This 2 disc set features a few stories about Frankenstein and his creation and then a show on one of the most popular real life werewolf stories of all time. The Frankenstein part was very fascinating. It has multiple parts and I learned a lot actually. Mary Shelley was just a teen when she came up with the story, but I didn’t know about the volcano eruption that some believed helped her come up with it. A volcano erupted in Asia and it caused climate change throughout most of the world. Most of the summer was dark from soot and the writers of that time including Shelley wrote some of the most famous horror stories of all time because of it. It also goes into who Frankenstein might be based on and what was happening in science at the time. The Real Wolfman follows an American cryptozoologist and criminal profiler as they travel to France and investigate a werewolf story from the 1700s. I don’t know if I agree that they solved the case because who knows if all the evidence was there, but it was still pretty cool. I wasn’t familiar with the story where people believed a werewolf killed over 100 people in a small town. If, like me, you enjoy The History Channel programming, you’ll enjoy this.

Sticking with TV, next is Sabrina Down Under. Now if you were a fan of the show you might remember this movie, but I wasn’t a fan so I had never seen it. Sabrina the Teenage Witch (Melissa Joan Hart) travels to Australia, but loses her powers. Clearly I’m not the target audience for something like this, but that’s fine. There are mermaids and mermen. There’s pop music and witchcraft. Even Salem the Cat got a love interest. I will say the backdrops are beautiful. Australia looks gorgeous. As a non-fan, the biggest surprise to me in it was Tara Strong although she wasn’t known as Strong at that point. The voice-over goddess plays a friend of Sabrina’s. I have no idea if she was in the series, but it was cool seeing a younger version of her. Fans of the show will enjoy the trip down memory lane I guess. 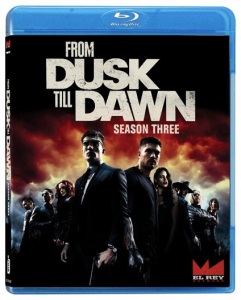 Continuing the TV trend, next is From Dusk Till Dawn The Series Season 3. As much as I want to love this show, I just can’t  get into it.  My issue is that most of it feels like a retread of the film instead of fresh new content. I do think that season 3 feels better. The brothers are back together, everything seems to be connected with new and older characters. There’s more cohesion. It’s also the breakout season for Madison Davenport who plays Kate. As a bad character, she seems to shine a lot more and demand more attention. I will say that the more I watch the show, the more it reminds me of Supernatural. Two brothers, supernatural beings, road trips, etc. Once the bar got blown up in season 2, the brothers hunting down the released demons really feels like Supernatural. I don’t love it, but I can see why it has fans.

Wow lots of TV this week. Next is Dynasty Season 1. I’m not sure if this 1980’s icon has been on DVD before, I think so, but I’m not sure. The show is classic 1980’s prime time soap drama. Produced by Aaron Spelling, Season 1 has all 15 episodes of the Carrington drama. It starts with Blake marrying Krystle and going from there. Season 1 has Fallon and Jeff eloping, Walter trying to make Steven straight, Walter and Matthew striking oil, Lindsay’s mom and Steven having an affair, Blake going on trial for murder and the season finale involving that trial. A perfect example of 80’s melodrama.

Last for TV, but certainly not least we have Star Trek Deep Space Nine The Complete Series. This features all 7 seasons on 48 discs. Deep Space Nine was never our favorite Star Trek series here at The Nerds Templar, but as sci-fi junkies, we respect it. I did like Avery Brooks as Captain Benjamin Sisko because I liked him a lot in Spenser For Hire as Hawk. This has a ton of special features including behind-the-scenes featurettes, crew dossiers, and photo galleries. The show was about a wormhole discovered by the Deep Space Nine crew known to the Bajoran people as the Celestial Temple of their Prophets. Sisko discovered  the wormhole and its inhabitants and becomes the Emissary of Bajoran prophesy. The wormhole’s other end is in the Gamma Quadrant, halfway around the galaxy from Bajor. That section of space is dominated by the malevolent Dominion. The Dominion is led by the Changelings, the race of shapeshifters to which Odo belongs. There’s a waging war on the Federation and their Klingon allies. The war is quickly becoming the most costly war ever for the Federation, and the Deep Space Nine crew must fight to protect their way of life. To me the show might be the most technologically based of all the Star Trek series. There were wormhole jumps and it seemed to have way more spaceships and creatures. I’d say it was closer to Battlestar Galactica than Star Trek. If you are a fan, this is a must own though and the box set is pretty darn impressive. Highly recommended.

Like Cotton Twines takes place in a Ghanaian village in Africa, centering around Micha Brown, a newly-arrived English teacher from the U.S., played by Jay Ellis (from HBO’s Insecure). One of his students, Tuigi, has to go to live at a shrine, and become a religious slave for ten years, to atone for her father accidentally killing another man. For some reason, despite him seeming to have JUST arrived there, and barely knowing Tuigi, or any of his students, he is obsessed with trying to find a way to stop an ancient tradition. Although, I think maybe there was just poorly done time advancement, as he makes a statement that makes it sound like he has been there longer. Either way, I found it odd that he feels it is a waste that ONE student has to leave her education to follow the religious tradition, he is willing to give up teaching the other 20 or so kids in his class, and leave them completely teacher less. Why is this one student worth more to him than all the other kids combined? Nothing really gives us the reason for his compulsion to help this one particular student. Really, the whole movie, kind of feels more like sequences, with a lack of true narrative. We aren’t really given Micah’s motivations. We aren’t really given enough about any of the characters to truly care what is happening. Despite giving us an interesting look into life in an African village, and a little sample of traditions and customs, there is not enough explained. The movie feels more like someone shot with a rough or early draft. The movie looks good, and was well shot. Some of the locations and scenery used are very nice looking, but no amount of beautiful shots and scenery can make you care about a lacking story.