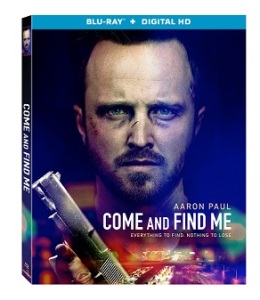 Aaron Paul gets caught in the dangerous criminal underworld as he searches for his missing girlfriend in the gritty crime thriller Come and Find Me, arriving on Blu-ray (plus Digital HD), DVD and Digital HD January 17 from Lionsgate. The film is currently available On Demand. From director Zack Whedon, this white-knuckle thrill ride also stars Annabelle Wallis. Come and Find Me will be available on Blu-ray and DVD for the suggested retail price of $24.99 and $19.98, respectively.

David and Claire’s idyllic relationship comes to an abrupt and mysterious end after Claire disappears without a trace. Devastated but incapable of letting go, David follows her trail down a frantic and increasingly dangerous path. Shocked at discovering that Claire was living a double life, he’s forced to risk everything if he ever wants to see her again.