Thanks to our sponsors, one lucky reader will win a DVD of Confirmation! You have multiple ways to enter! First, email Murraymakercontests@gmail.com with your favorite political film. Then like us on Facebook https://www.facebook.com/TheNerdsTemplar/ for a second entry and then follow @murraymaker and @therockymaxwell on Twitter for two more entries. Contest ends August 2, 2016. US addresses only. 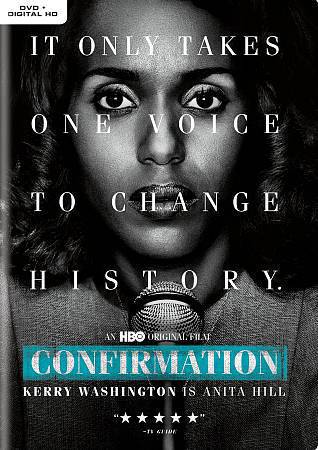 The film details the explosive Clarence Thomas Supreme Court nomination hearings, which brought the country to a standstill and forever changed the way we think about sexual harassment, victims’ rights and modern-day race relations. It looks behind the curtain of Washington politics, depicting a pivotal moment in American culture that became a turning point in workplace equality and gender politics.

In July 1991, President George H.W. Bush nominated Judge Clarence Thomas to fill Justice Thurgood Marshall’s seat on the U.S. Supreme Court. In October, during the final days of Thomas’ confirmation hearings before the Senate Judiciary Committee, both Newsday and NPR broke the story that one of Thomas’ former employees, law professor Anita Hill, had accused him of sexually harassing her ten years earlier. These revelations triggered a maelstrom of events, with both Hill and Thomas testifying about the allegations before a stunned and riveted television audience. The release includes brief discussions with Washington and Pierce on the historical impact of the hearings as well as “Character Spot” featuring cast members discussing the character they play.