New to Me is a series here at The Nerds Templar where we discuss a film that has been out for a while. It’s most likely available on DVD or streaming services, but it’s our first time seeing it. Hence, it’s “New to Me”! 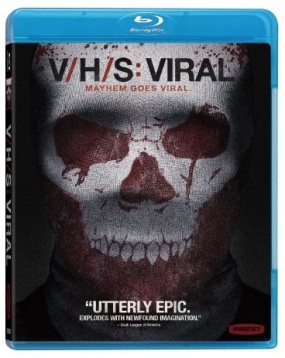 V/H/S: Viral is the third film in the V/H/S franchise. It’s also the weakest of the three. The series seems to get worse as they progress. Unfortunately this one really only had one good and one decent snippet.

For those not familiar with the franchise, different directors make different segments that somewhat tie into each other to make one solid movie. At least in theory.

My issue with this one is, none of it really seemed to go together and the car chase part was rather pointless till the end and by then I didn’t care.

I did like the magician segment. That was the best one. It’s not great or anything, but it stands out. The effects were cool and I liked that story the best.

The parallel universe segment was decent. It looked good and you definitely didn’t see the surprise in it coming. I won’t say what it is because if I had to see it, you do too.

The Latino gang banger part was pointless. I honestly have no idea why it was in there. The skateboarders in Tijuana didn’t work for me either. I’m not a fan of shaky cam and extreme sports style filmmaking so I didn’t like the look of that segment at all.

The only reason you should watch V/H/S: Viral is if you watched the first two. If you aren’t familiar with the franchise or the similar ABC’s of Death, I don’t think you’ll like this at all. None of this worked for me and they seemed to struggle to put it all together. Because of that, it’s…

ONLY FOR THE DIEHARD FANS!