“A refreshing triumph…’Those People’ positions itself in the vanguard of the new LGBT film wave as an instant classic about loyalty, forgiveness, self-nurturing, and accepting love even when you don’t feel you deserve it.” – SEATTLE GAY SCENE 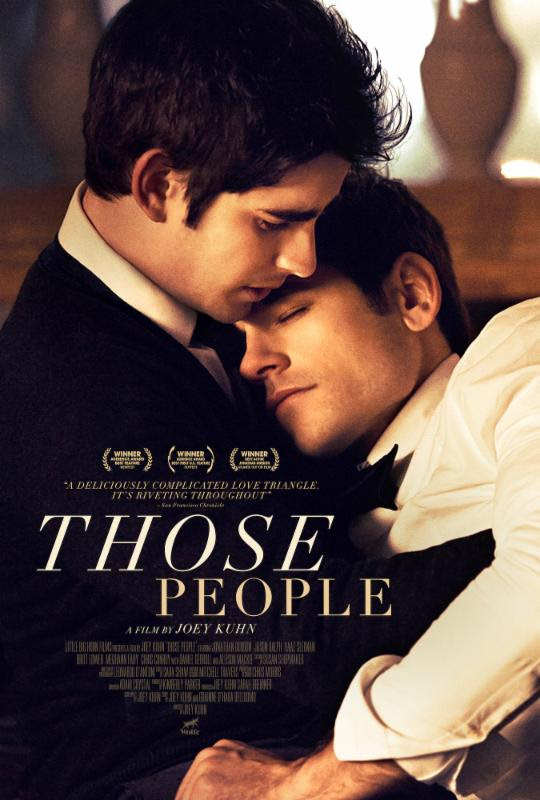 On Manhattan’s gilded Upper East Side, an impressionable young painter, Charlie (Jonathan Gordon), finds the man of his dreams in an older pianist from across the globe, Tim (Haaz Sleiman, ‘The Visitor”). Unfortunately, Charlie is also consumed with desire and love for his manipulative best friend, Sebastian (Jason Ralph, “The Magicians”), who is embroiled in a Bernie Madoff-esque family financial scandal. Sebastian’s coping mechanism is non-stop moneyed hedonism, and he insists Charlie join him on his self-destructive streak of sex, drinking and partying at his father’s massive penthouse. In the wake of Sebastian’s dangerous downward spiral, their tight-knit group of friends must confront the new realities of adulthood. Manhattan’s Upper East Side provides the backdrop for a riveting tale of entitlement, privilege, loyalty, and their complicated effect on a young man’s chance at love.

RELEASE PLATFORMS:
THOSE PEOPLE released exclusively on Vimeo On Demand May 13th, and releases June 14th on DVD / VOD via Wolfe Video across major retailers and digital platforms including iTunes, and WolfeOnDemand.com.

ABOUT THE DIRECTOR:
Born and raised in New York City, writer/director Joey Kuhn makes films that draw inspiration from the nexus of fine art and pop culture. Joey’s short films Thinly Veiled (2010) and Now Here (2011) have played at festivals around the world. In addition to his work as a writer/director, Joey is an editor and a still photographer. He graduated from Brown University in 2007 with a B.A. in Art-Semiotics and graduated with an M.F.A. from NYU’s Graduate Film Program in May 2014. THOSE PEOPLE is his first feature film.