Not a whole lot for us this week, but I’ll start with my clear cut favorite, The Stylist. Based off the short of the same name, this is a fantastic little indie thriller I totally enjoyed. Najarra Townsend plays a hair stylist who may also enjoy scalping people. Her character has issues, but what I love about the movie is that it never really explains her issues, has no backstory to her character and simply let’s her be crazy. So many movies get bogged down explaining things when ultimately I just want to watch a fun slasher flick with a crazy lead and that’s this movie. She befriends a client who needs her hair done for her wedding and she tries to control her urges while hanging out with her new friend and her bridal party. But of course those urges are hard to control and you watch her slowly lose it. It has some fun kills, has a good slow-burn tempo (because again it doesn’t lose steam explaining stuff) and Townsend is just brilliant in her role. It comes with commentary, a great Behind-the-Scenes Featurette for those of us who aren’t familiar with the film and its short and other bonus features. If you are looking for an under-the-radar horror thriller, I highly recommend it. A fantastic surprise.

Second we have Undercover Punch & Gun. This Chinese crime drama is pretty solid, but I did want a bit more from it. It feels very similar to a lot of other films, but I also watch a ton of Asian crime dramas. It has some good fighting and action, but it could have used some more. It’s about an undercover cop who becomes the leader of a gang after its leader is killed in a deal gone wrong. Another group is out for revenge on a former colleague who killed their friends. They have to team up with the undercover cop on the high seas to stop the smuggler. The undercover cop has a partner that brings some comedic relief and there is some good hand-to-hand action, but I think the film has more potential. I can see myself watching it again at some point, but there are definitely better movies I’d watch first. But if you are a fan of this genre like me, I do recommend it.

Third we have Sin, a film about Michelangelo. This biopic is about his time finishing the Sistine Chapel and becoming obsessed with finding the right marble to make a tomb for the pope who had just died. Two families were in power at the time, Della Rovere and Medicis and neither liked one another. Michelangelo felt obligated to finish his work for the Della Rovere fraction, but was constantly in debt or drunk. He never felt like his work was good enough despite everyone thinking he was a genius. I’m not sure how historically accurate the film is, but I thought the lead actor was good even if I wasn’t all that interested in the storyline. The filmmaker doesn’t make him look like the well respected man we think of today. He was a drunk, hated other artists of the time, didn’t work well with others and didn’t care who got hurt in the process. I don’t know if it’s something I’d personally watch again, but if you are interested in the man you might like it.

Next we have Center Stage. No this isn’t the American dance franchise, this is the 1991 Chinese film that has been restored and is hitting Blu-ray for the first time in North America. It is about silent screen actress Ruan Lingyu, her rise in fame and ultimately her death. It’s not a straight forward biopic though. It has current day (well for its release) footage of people talking about her and others of that time period and then also re-enactments of the silent film era. I wasn’t familiar with the actresses of that time or her individual story so it was all new to me. The lead actress Maggie Cheung is great in the role and I like how they show what films still exist and which ones no longer do. It’s a mix of a period piece with current “interviews” so it helps break up the 154 minute runtime. The bonus features include multiple interviews and introduction by the film’s director. If you are a fan of the film you will enjoy this new restored edition. 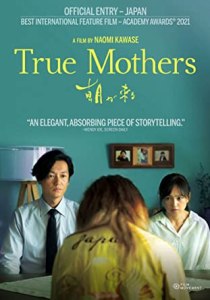 True Mothers is a Japanese film about a family who adopts a child after learning the husband has an issue releasing sperm. At first you think the film will go in one direction as the adopted son gets into trouble at school, but turns out the other child was lying. The parents are a bit well off and you’re assuming the film is about them. But then it takes a turn into the backstory of the biological mother. She was a young teen who got pregnant and whose parents forced her to live in a situation with other pregnant girls who will give their kids up for adoption. She is shunned by her family after she gives birth, working odd jobs and getting involved with some bad people she owes money to because of a friend. She hunts down the adoptive parents and wants her son because she never wanted to give him up in the first place. At least she claims to be the mother. I like that the film didn’t go where I expected it to go and doesn’t really tie up all the strings either. The ending is somewhat you expect, but it’s not perfect and there isn’t 100% closure with everyone. The young actress is really good as is the adoptive mom.

Last we have Power Book II: Ghost Season 1 which picks up after the events of Power. I know some people who really enjoyed Power, but it wasn’t something I watched consistently. You should watch that before this to get an understanding of everything. If you do, you’ll probably question how after all the deaths of that show, they make a spinoff show for Tariq a character most fans did not like at all. He gets into the drug game to pay for a lawyer for his mom, but honestly, even though I didn’t love Power, it’s a much better show than this. Method Man, Mary J. Blige, Mark Feuerstein don’t help much and are the clear cut best actors in the show which is saying something. I know this show did split the fandom and I can see why. Despite it being similar in terms of storyline, it lacks the tone and intensity of Power. They are allegedly doing multiple spinoffs with different characters so hopefully those are better.