Not a lot for us this week so I’ll start with the biggest title, Donnie Darko. The Richard Kelly flick is getting a 4K release this week which fans will eat up. The Jake Gyllenhaal starring film has grown a huge cult following since its first release. I had seen it once around 2003 and never got the rave reviews for it. I hadn’t seen it in years and watching it now, it has grown on me a bit, but it still doesn’t make a ton of sense nor do I get the devotion for it. Is it as bad as I remember? No, but I still can’t say I like it. I noticed some things I did like about it this time around though. I did like Kelly’s style and use of music. He gives the film a good aesthetic. It’s a throwback/homage to a time that means something to him. The music and setting firmly puts you in the 1980’s. In my first viewing I might not have known who Seth Rogen was at the time. I put in this new release and was like “Wow, Seth Rogen was in this”. This release comes with a 4K restored version of both the Theatrical and Director’s Cut. It also comes with a slew of commentaries, deleted scenes, alternate scenes, featurettes and more. Diehard fans will surely love it. I don’t hate the film as much as I used to, but it’s still a chore to watch.

Heartworn Highways was a 1970’s documentary that introduced the world to some legendary country musicians. Guy Clark, David Allan Coe, The Charlie Daniels Band and more showed that country can have an edge to it. The performances in it are fantastic and is the type of country music that I don’t mind listening to. It’s about hard living and whiskey and today’s pop-country just doesn’t come close. I had actually never seen the film and I’m glad it came my way. Heartworn Highways Revisited came out 40 years later and shows the area is still putting out solid outlaw country. Some of the original musicians featured in the first film are back, but it showcases newer acts carrying on the tradition. I dug these a lot and I’ll be honest, I looked up a few of the musicians afterwards to listen to more of their music which is a huge point of rock-docs, introducing music to new fans. These documentaries look and sound great on Blu-ray. If you are a fan of these films, these are a must own. 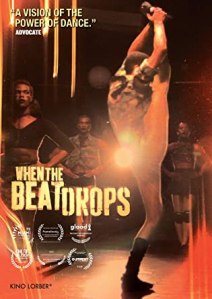 Sticking with music documentaries, When the Beat Drops is a documentary on bucking, a type of dancing popular in African-American and gay clubs especially in the South. It’s main focus is one dance group in Atlanta where it started in the 1990s. Anthony, a large, gay black man is the leader of the group who helps choreograph and get his dancers ready to compete in the clubs and ultimately bucking’s first competition. It started out because men wanted to look like the powerful female dancers they saw with marching bands at football games. The men brought the dancing to gay clubs and it took off from there. A lot of the men are teachers or work in jobs where they don’t want their private lives known about and that’s their biggest worry, footage of them dressing up and dancing might cost them their jobs. I’m not really into dancing or the nightclub scene so I have no idea if bucking is well known, but if you are familiar with it, you might like this documentary.

Next we have Cast a Dark Shadow/Wanted for Murder Double Feature. Cast a Dark Shadow is about a playboy type who is married to an older woman with money. He gets her to start drinking and plans her death to look like an accident  A local inspector suspects foul play, but can’t prove it. He gets involved with another older widow and marries her, but another woman comes along. She has a secret that might help prove his guilt. Wanted for Murder is about a man who strangles women and slowly goes insane. He becomes almost obsessed with a woman who starts to fall for a a public transportation worker which drives the man even more insane. The local authorities have to prove his guilt and stop him from strangling again. Both films are decades old, but the storylines are pretty timeless. Two solid noir films that I was not familiar with.

Last we have the latest from the Retro Afrika Collection. Faceless Man is about a man caught up in a political assassination who works with the police to clear his name, but there might be a corrupt cop behind all of it. Run For Your Life is about two friends who get caught up in a drug ring and must work the fields themselves or try to escape. Ambushed is about a ranger trying to get his wife and son back from a gang of army deserters. Are they great movies? No, but I respect what they could accomplish with the limited resources and talent they had available. Like with all releases in this collection, some are better than others and sometimes you find yourself laughing at them and not with them. But if you’ve been collecting the Retro Afrika Collection so far, add these to your collection.