Academy Award® nominee Tim Roth (Best Supporting Actor, Rob Roy, 1995) stars as THE PADRE, a small-time con man on the run from his dogged pursuers in the action-adventure debuting on digital and VOD on August 28, and in select theaters September 28 from Vertical Entertainment, and on DVD October 30 from Sony Pictures Home Entertainment. When the Padre is caught mid-con, he flees the scene in a stolen car, unaware that a precocious 16-year-old girl, Lena (Valeria Henriquez), is stowing away in the back seat. After she blackmails him into letting her join his journey, the duo plan their biggest heist yet – not always aware of the dangers of working with each other and the law closing in on them. Directed by Jonathan Sobol (The Art of the Steal), THE PADRE also stars Luis Guzmán (Boogie Nights) as a local police officer and three-time Academy Award nominee Nick Nolte (Best Actor: The Prince of Tides, 1991, Affliction, 1997; Best Supporting Actor, Warrior, 2011) as U.S. Court Justice Nemes. 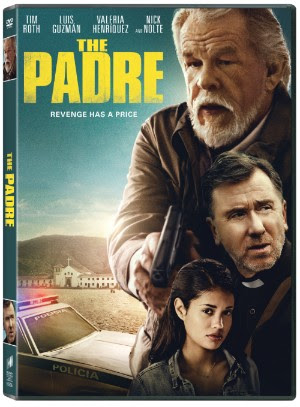 Synopsis:
Hell-bent on justice, retired U.S. Judge Randall Nemes (Nick Nolte) and his hired gun, Gaspar (Luis Guzmán), track down a small-time con man (Tim Roth) posing as a priest in a small Colombian town only to be thrown off-course by a scrappy 16-year-old local girl intent on reuniting with her little sister in the U.S.

Directed by Jonathan Sobol, THE PADRE was written by Stephen Kunc, produced by Nicholas Tabarrok and executive produced by Alan Moloney, Jeff Sackman and Berry Meyerowitz.

THE PADRE has a run time of approximately 98 minutes and is rated R for language and some violence.