Go beyond your wildest fear when the Vestron Video Collector’s Series releases the third entry in the iconic Re-Animator series, Beyond Re-Animator, arriving on limited edition Blu-ray™ on July 24 from Lionsgate. Directed by horror veteran Brian Yuzna (The Dentist, Faust, Return of the Living Dead III) and starring Jeffrey Combs as Dr. Herbert West, everyone’s favorite mad scientist continues his re-animation research, turning the penitentiary he’s been incarcerated in for the past 14 years into a new branch of hell. Beyond Re-Animator is loaded with all-new special features, including interviews with Brian Yuzna and Jeffrey Combs, isolated score selections, and a production art gallery by illustrator Richard Raaphorst! Region-free, restored, and remastered, theBeyond Re-Animator limited-edition Blu-ray will be available for the suggested retail price of $39.97. 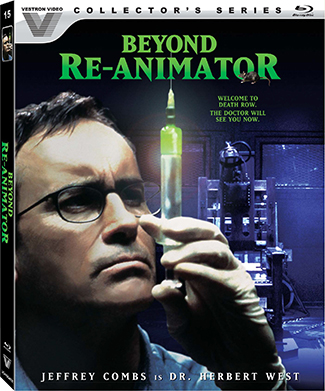 After causing the Miskatonic University Massacre, Dr. Herbert West has been serving a prison sentence for the past 14 years. When Howard, a new young doctor, comes to work as the prison MD and requests Dr. West’s assistance, Dr. West discovers that Howard has something he left behind 14 years ago….

Jeffrey Combs            Re-Animator franchise, The Frighteners, From Beyond