Blumhouse (Split, Get Out, Whiplash) produces an original and inventive rewinding thriller in Happy Death Day, in which a college student (Jessica Rothe, La La Land) relives the day of her murder with both its unexceptional details and terrifying end until she discovers her killer’s identity.

Happy Death Day is directed by Christopher Landon (Paranormal Activity: The Marked Ones) and written by Scott Lobdell. 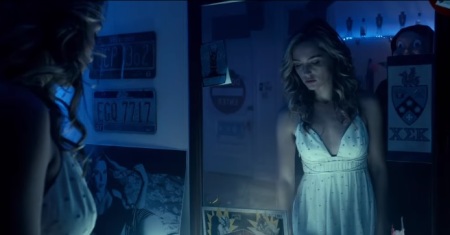 Happy Death Day is better than it has any right being. Don’t get me wrong, it’s not a great movie or close to it, but it’s more watchable than the garbage they put out there that passes for horror/thrillers today. I was expecting another dud like Friend Request or Unfriended, but instead got a movie I kind of liked.

The movie gets a lot of points for originality. It’s the Groundhog Dog/Edge of Tomorrow of horror/thrillers. Reliving your day until you figure out who killed you is pretty good. Jessica Rothe plays Tree, the college student reliving her day. I’ve seen La La Land but I’m not super familiar with the actress. After seeing this, I like her. Yes she is very easy on the eyes, but I liked how she handled the role. She’s funny, she’s charming, she captures and holds your attention. A different actress and the movie could be completely unwatchable.

It has its flaws of course. I think they could have had a bit more fun with it. Once she figures out she’s reliving her days and can change things to figure out what’s happening, there are scenes that take advantage of this concept. She walks out of a dormitory building naked because she knows no one will remember it once she’s killed. That being said, they could have really taken advantage of the concept just like Edge of Tomorrow did. The royally underrated Tom Cruise/Emily Blunt movie had a lot of fun with the ways they got killed and repeated events. There is one scene in this where Rothe’s character elbows glass and takes out an ax. I would have killed her by having her bleed out from the glass in a quick death/repeat. It adds just a bit more humor to the film which already had comedic elements.

I didn’t love who the actual killer was either. I won’t spoil it, but it was a let down. Of course they go with the tried and true fake bad guy, wait surprise it’s someone else, but that someone else didn’t really work for me. Plus there’s no real proof it was that person other than Rothe’s character saying it was them all along. Maybe they left it vague enough to open the door for a sequel which this very easily can have. If it does well at the box office, I see the sequel being greenlit by the end of the weekend. There is also a scene where she farts that was so unnecessary.

Happy Death Day isn’t the abomination I was hoping it would be. I expected it to be so bad I would be laughing at it and not with it. Instead I got a somewhat decent movie with a good lead actress and some originality in a genre that often doesn’t try to be original. It should do well at the box office now that everyone has already seen IT.