We here at The Nerds Templar are big fans of Pop!s by Funko. I personally have a solid collection and Asst. Editor Rocky Maxwell has quite a bit of them himself. We got our hands on six of Funko’s latest figures representing the Netflix/Marvel series Daredevil and Jessica Jones. As a fan of both shows I was looking forward to playing around with the latest Pop!s and seeing how they compared to other figures out there. I’ll start with Daredevil first.

Charlie Cox plays Matt Murdock/Daredevil in the show and this figure, #214, represents more of Daredevil’s costume in Season 2. Season 1 Matt ran around Hell’s Kitchen in more everyday clothing, Season 2 saw an upgrade to what we consider superhero costuming. That’s what stands out in this figure, the texture of his armor. You can feel the ridges on his chest plate and I like the feel of his horns which was something we didn’t see a lot of in Season 1. This is what I think of when I think Daredevil. To learn more about this figure and purchase it, check out: http://www.entertainmentearth.com/prodinfo.asp?number=FU11096&TH-702086086#.WK4SvvkrLIU 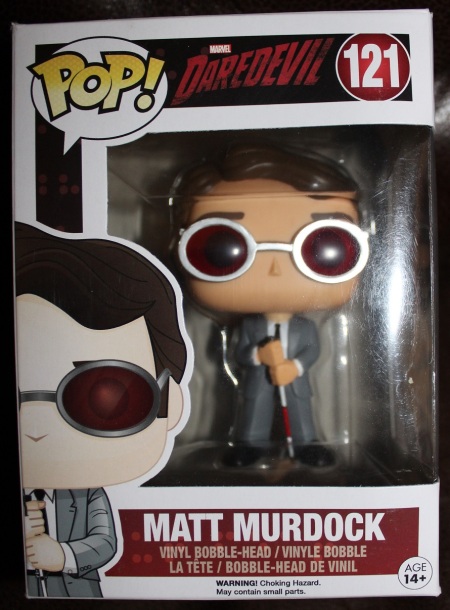 Sticking with Daredevil, next is a pretty sweet Matt Murdock figure. Pop! #121 sees Charlie Cox out of his superhero outfit and in his lawyer suit. With sunglasses and cane, the blind Marvel hero looks like your everyday man on the street. I think they captured Cox’s face really well here. Some human Pop!s don’t look like who they are supposed to, but I genuinely see Charlie Cox in this figure. There’s some really good paint work on his tie and cane as well. Probably my favorite Pop! of the six I received. Again, check out Entertainment Earth for more info and to buy your own! http://www.entertainmentearth.com/prodinfo.asp?number=FU7030&TH-702086086

Season 2 saw The Walking Dead’s Jon Bernthal come in as Frank Castle AKA The Punisher. Pop #216 gives us this version of Marvel’s vigilante. I love the detail on Frank’s classic t-shirt. Anyone that has seen any version of Punisher knows the skull shirt. That’s a must have for any Punisher merchandise and I’m glad they didn’t skimp on that detail here. I also like the detail on his “assault rifle”. There is also an exclusive version with The Punisher holding Daredevil’s mask. For details about that or this figure and to buy your own, check out Entertainment Earth: http://www.entertainmentearth.com/prodinfo.asp?number=FU11092&TH-702086086#.WK4UCvkrLIU

Along with Punisher, Season 2 introduced Elektra to the show. Gone is the forgettable Jennifer Garner version. French actress Elodie Yung plays the hero in the show and Pop figure #215 captures the more authentic look of Elektra. Jen Garner is a sweetheart, but her version of the Marvel character just didn’t do it for me. This TV character and the look of this Pop! is what I personally think of when I think Elektra. I was worried the black paint might wear off from handling the figure, but after a few days of messing around with them, it still looks good and shiny. Buy your own here: http://www.entertainmentearth.com/prodinfo.asp?number=FU11095&TH-702086086

Next we have Pop! #162 Jessica Jones from Jessica Jones. It captures Krysten Ritter’s character perfectly with jeans, ass kicking boots, scarf and leather jacket. This was another one I thought might have paint issues, but it held up well with play. Her dark hair and jacket are still shiny black even with a lot of handling. The scarf has the most detail and you can feel the layers of it quite well. Buy yours today: http://www.entertainmentearth.com/prodinfo.asp?number=FU11097&TH-702086086#.WK4YSvkrLIU

Sweet Christmas! Last, but not least is Luke Cage. Now Luke has his own series, but he was introduced to us in Jessica Jones so he is part of this collection. I’d assume we’ll see other Luke Cage figures later on through his own series though. Power Man looks pretty powerful in Pop! #163. His leather jacket has great detailing especially the zipper. There’s great coloring on his shirt, jeans and boots. Mike Colter looks pretty good in toy form. Buy yours today: http://www.entertainmentearth.com/prodinfo.asp?number=FU11098&TH-702086086#.WK4YT_krLIU

The Matt Murdock is probably my favorite of the six, but if you are a collector, you can’t go wrong with all six. Definitely look into the Punisher exclusive. That one seems cool. You can take them out and play with them and put them back in their box and put them on a shelf like I do mine. They stack extremely well together and I pretty much have a wall of Pop!s in my bedroom.